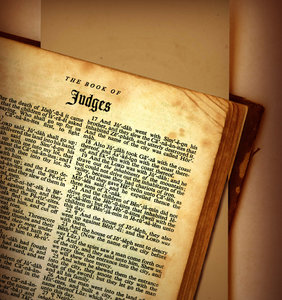 Yesterday I told you about the 4 cycles that we see over and over again in the book of Judges. Let me remind you of what that cylce is, this time in a simpler way:

Today, we’re going to talk about the first of these cycles.

Why was God so specific about driving out the inhabitants of the land?
God knew that the inhabitants of the land were involved in all sorts of pagan worship. They worshipped idols like Baal and Ashteroth. There worship wasn’t singing or listening to preaching like we experience in corporate worship. It included self injury, immorality, and at times even human sacrifice.

The children of Israel disobeyed God when they got to the land. They allowed the inhabitants to stay. This lead them to participating in the practices and worship of the people that God had told them to conquer.

Life Step: Think about it…
Isn’t it the same in our life? So often we end up just flat out disobeying God. Unfortunately, disobedience ends up leading us to many other kinds of sin. It’s so important that we fully obey God. Partial obedience is disobedience.

Do you think that sometimes we don’t take sin seriously? How do we do that?

Do you think that sometimes the people we allow ourselves to be around or to be influenced by lead us to sin?

Brian Berry and Ben Jennings talk about how we can know that God is ruling and active among the nations.…

Trent Dibell and Ben Jennings talk about the importance of trusting God by studying through Isaiah 7:7-17, the text for…

Ben Jennings and Brian Berry study Isaiah 6:1-13 and talk about God’s call on our lives.