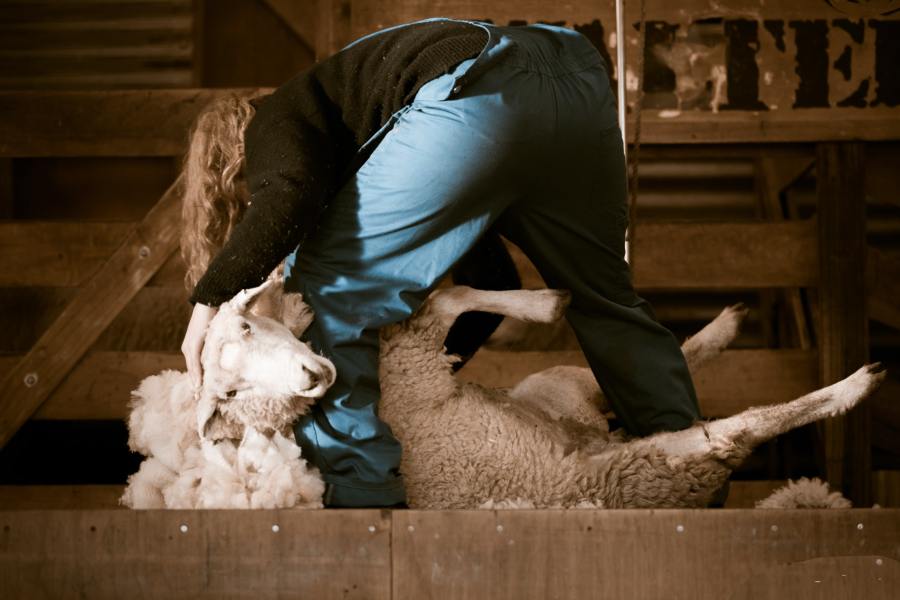 He was oppressed, and he was afflicted, yet he opened not his mouth: he is brought as a lamb to the slaughter, and as a sheep before her shearers is dumb, so he openeth not his mouth.  (8)  He was taken from prison and from judgment: and who shall declare his generation? for he was cut off out of the land of the living: for the transgression of my people was he stricken.  (9)  And he made his grave with the wicked, and with the rich in his death; because he had done no violence, neither was any deceit in his mouth.

Here Isaiah continues to refer to the affliction of his servant, the messiah.  He also continues to use the sheep metaphor from the end of the previous stanza.  But here there is a contrast between the ones for whom the servant is sacrificed, and the servant himself.

When sinful people like us are compared to sheep, it refers to the tendency of the sheep to get lost.  When the servant is compared to the sheep, the non-defensive and submissive nature of the sheep becomes the basis for comparison.

So, it is a negative comparison for us, but a positive one for Him.  He shares our human nature, but his is without sin.  It is innocent.

Even though he is being falsely accused, he voluntarily participates in his own slaughter.  He presents no vigorous defense of himself.  And this is exactly what is described in the trial and execution of Christ.

(13)  Then said Pilate unto him, Hearest thou not how many things they witness against thee?  (14)  And he answered him to never a word; insomuch that the governor marvelled greatly.

(9)  And went again into the judgment hall, and saith unto Jesus, Whence art thou? But Jesus gave him no answer.

Why would Jesus give no defense?  Can it be that the Servant does not see himself as a helpless victim of circumstances beyond his control, but is participating voluntarily in something that he understands to be part of the larger purposes of God (cf. Isa_53:10)?

He is a sheep that is going to slaughter.  He is going to be sacrificed for the sins of the people.  He is not the straying sheep in need of pursuit by a shepherd.  But what purpose can there be in what the Servant is experiencing?   Not only has he done nothing worthy of the death to which he is brought; he is receiving the treatment someone else deserved.

The prophecy goes on to describe circumstances surrounding his crucifixion.

(8)  He was taken from prison and from judgment: and who shall declare his generation? for he was cut off out of the land of the living: for the transgression of my people was he stricken.

Here you have the servant in prison and being judged.  Here you have his being cut off from the land of the living.  He is killed.  Then you see him buried.

(9)  And he made his grave with the wicked, and with the rich in his death; because he had done no violence, neither was any deceit in his mouth.

John describes the fulfillment to this prophecy in his gospel.

(41)  Now in place where he was crucified there was a garden; and in the garden a new sepulcher, wherein was never man yet laid.  (42)  There laid they Jesus therefore because of the Jews’ preparation day; for the sepulcher was nigh at hand.

An unused garden tomb would not have been the normal place to place the body of a condemned criminal.  It would have been very costly.  Even by today’s standards this would be the more expensive option.  But of course, we know, he only borrowed the tomb.  He didn’t need it long.  He was silent through the whole process.  Why? Because he was fulfilling God’s providential plan of redemption!

Think about the willingness of Christ to go through this process.  What motivated him?  Certainly obedience to the Father was part of it.  Jesus said in the garden “not  my will but thine be done.”  Love motivated Him.  He came to seek and to save that which was lost.  God loved the world so much that He sent His Son.